“Good, because we just got a bunch in our garden co-op flat. Steve and I don’t like them. I’ll bring them to you.”

It occurred to us that they might taste good roasted. We googled “roasted radishes,” and sure enough, they were a thing. We glazed them with butter and garlic, roasted them for ten minutes in the oven, then another five minutes under the broiler, and served them with scrambled eggs to our son after an early morning of fencing. They passed the “Mikey likes it!” test.

Later, we tossed the leftover roasted radishes into a food processor with roasted corn and potatoes, ground them into tiny chunks, cooked the mixture in broth, and added a bit of sour cream and Cajun seasoning to make a tasty, garden-fresh, roasted radish soup. It was warm, but with the freshness of gazpacho and the zing of fresh radishes.

We gave some to Nancy and Steve.

“This is yummy!” Nancy declared. “I could eat this every day and twice on Sundays!”

Here’s how it all went down:

Our initial thought was to see what roasted radishes tasted like, so we rinsed, scrubbed, and quartered one bunch, then basted them with a mixture of butter and garlic paste. (The best way is to stir it all together in a bowl until the radishes are well-coated with the garlic butter mixture.) We spread them out evenly on a baking sheet and baked them in the oven for about 10 minutes at 350 degrees, then followed up with an additional 4-5 minutes under the broiler for a crisp finish. They were delicious, and we ate a few of them with eggs for breakfast.

The next day, we decided to go for the soup idea. Mark began by coarsely chopping and sauteing the onion in olive oil. When it was lightly transparent, he added in the roasted radishes, along with the second bunch of fresh radishes and sauteed those until the fresh radishes became slightly fork-tender. Next, he added the roasted corn, along with the Cajun seasoning, and sauteed for a couple more minutes, being careful not to burn or scorch the mixture.

Next, he spooned the mixture into our Vitamix and pulsed it with 2 cups of water until it was mostly pureed with some remaining chunkiness. (Keep those tiny chunks intact!)

He transferred the sauteed, mostly pureed contents into a soup pot. We already had the leftover roasted corn-on-the-cob (roasted the day before on the grill at 350-400 degrees for 10 minutes) and some leftover garlic mashed potatoes (Yukon gold, boiled and mashed with butter, soy milk, salt, and garlic paste to taste). He added that, along with the sour cream, fresh dill, and bouillon, and simmered for 15-20 minutes. (The tiny radish chunks were still slightly crunchy at that point.) He added salt and pepper to taste and served it up in in a bowl with a dollop of sour cream and a sprig of fresh dill.
So good!

Let us know how it works out for you! Season to taste and make it your own adventure. 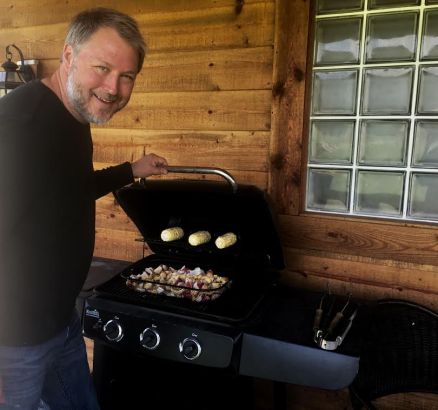 EPILOGUE:  We tried it another time and decided to put the radishes, corn, and potatoes on our outdoor grill. It sounded like a great idea, but the potatoes didn’t turn out as creamy and smooth, and everything had a smoky, meaty, campfire flavor. We preferred the first variation. It was fresher and more like gazpacho, even though it was warm. Bottom line—we recommend roasting the radishes in the oven (not on the grill) and boiling and mashing the potatoes rather than grilling them—at least for the soup. That grilled corn though…

Tell us about your own vegetarian adventures!